To Build a Better Broom 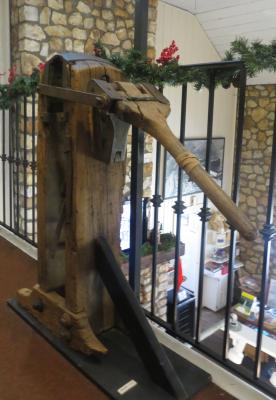 On September 11, 1869, a letter from a Mississippi farmer appeared in Scientific American inquiring on the best broom corn cultivation practices. Broom corn represented one of several crops Southern farmers turned to when diversifying their fields post-Civil War. The letter states cotton no longer represented the economic backbone of farmers. The lack of slave labor and the growing need to diversify also witnessed a rise in mechanization. The broom vise is one representative of this trend.

Per a stamp on the museum’s vise, it was patented on September 10, 1878. Further research shows David Bard of Cincinnati, Ohio created this model. Broom vises helped broom making in that once the straw and handle were tied together, one placed the broom handle down in a vise. The user then

pulled a lever to clamp the straw in place so that it may be sewn into the triangle shape. This model provided an improvement on previous models, as Bard made one with removable jaws, the part that holds the straw in place.

A New Economy in the "New South"

Broom making was not a new economy in North Carolina. The Moravian’s who settled near present day Winston-Salem grew broom corn for their own broom making business. Broom corn commonly represented a home crop; not something grown for cash value but for personal use and small, local sales. However, with more machines some saw broom making as a business. In 1903, a Mr. J. L. Ingold of Hickory, N.C. wrote about his personal experience with growing broom corn and broom manufacturing. He made 300, three pound brooms in January with the help of machinery, although he does not specify what machines he used. This mechanization not only created additional income for families but also in towns and prisons. The growing mechanization bringing changes on a personal and cultural scale, shaped what was known as the New South.

“Broom Corn Cultivation”. Report of the Commissioner of Agriculture of the State of North Carolina. Raleigh, N.C. 1903. Accessed on 14 November 2017.

This blog is related to: