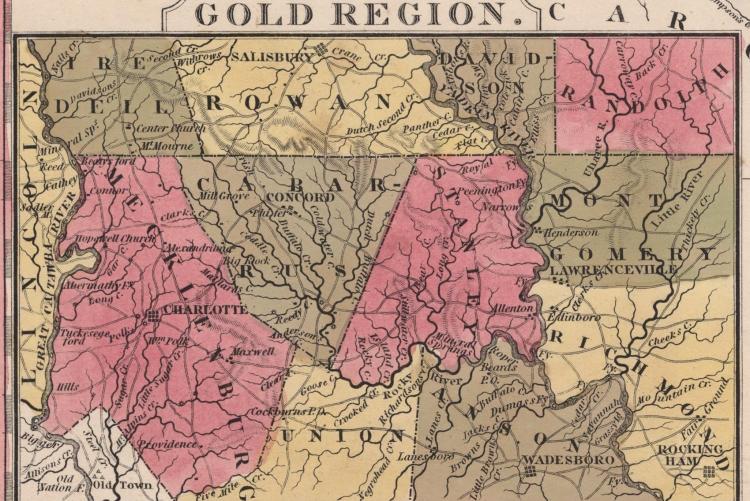 Waking Rip Van Winkle: Gold, Mineral, and Gem Mining in Western North Carolina examines various types of mining in the mountain region—from gold used for currency to precious stones set into jewelry—and considers how this industry helped awaken the state from its nineteenth-century economic slumber. The exhibit will run through January 3, 2022, at MGM, located at 24 Water Street in Old Fort. Admission is free.

During the early 1800s, North Carolina was considered a sleepy, backward state with a sluggish economy and little interest in change. It became known as the “Rip Van Winkle State.” Rumbles of change began in 1799, when gold was discovered in Cabarrus County. Two decades later, the Carolina Gold Rush was in full swing, generating interest in other mineral resources. The mining boom spurred improvements in Tar Heel industry, commerce, and infrastructure during the mid-1800s. It also stimulated progress in mining technology and prompted population movements. By the 1850s, mining in its various forms had helped North Carolina shake off its negative nickname Waking Rip Van Winkle will look at the North Carolina Gold Rush; feature mineral samples, such as spodumene, olivine, and mica; examine the methods of gem and mineral mining in the state between 1799 and 1900; and consider mining’s legacy in Western North Carolina, as well as its impact on both the environment and the economy.

To learn more about western North Carolina’s mining history, be sure to visit Waking Rip Van Winkle. Mountain Gateway Museum is open year-round but is now operating on reduced hours because of restrictions imposed to help prevent the spread of COVID-19. Current hours are from 10 a.m. to 3 p.m. Tuesday through Saturday, closed Sunday and Monday. For more information about the exhibit, please contact Jesse Bricker at 828-668-9259 or jesse.bricker@ncdcr.gov.